UKI Arkkitehdit has been awarded joint 1st prize in the design competition for the City Garden in Turku. The significant urban area is located in a district called Peltola – about three kilometres away from Turku City Centre, right next to the city access roads and Skanssinmäki Cemetery which has cultural historical value.

The competition aimed to find development ideas for the old city garden area and form a basis for the city plan renewal. Approximately 11 ha. wide area is owned both by the city of Turku and The Congregation Union of Turku and Kaarina. The new construction floor area for the City Garden is about 50 000 square meters.

A member of UKI Arkkitehdit design team, architect SAFA Sasu Alasentie, said that the competition entry Havina has been heavily influenced by the park’s fine old trees, plantings and vegetation. The old rows of trees and plants determined the building placements.

“Our office has done a lot of infilling development in different areas. Turku City Garden is an exceptional destination as there is, expect for a few protected valuable buildings, hardly any previous building stock”, he states.

UKI Arkkitehdit’s plan suggests for example placing apartment buildings and townhouses to the City Garden area. According to Sasu Alasentie, the goal is to build affordable housing and a diverse population. The plan also provides some commercial spaces and street spaces promoting communality in the area. 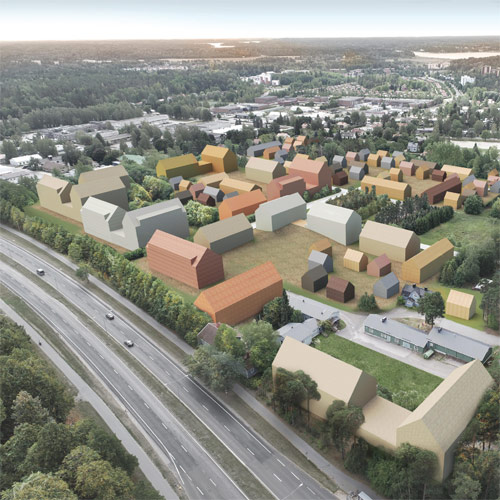 The competition entry was praised for preserving the area’s distinctive tree rows, vegetation and buildings and for combining different architectural styles from different time frames into contemporary design. According to the evaluation report, the blocks have an interesting mix of high- and low-rise construction. The material palette seems natural for the area.

The competition was organized by City of Turku, The Congregation Union of Turku and Kaarina and TKY-Rakennus Oy. There was an open call in competition enrolment – based on their references, four teams were selected among the 25 applicants.

Read more about the competition on the City of Turku website.