In 1972, Matti Heikkinen followed in the footsteps of his father Uki Heikkinen and took charge of the company.

It was a time of growth for the company. More than ten design professionals with long experience and solid skills worked in the office.

Architectural firm Uki Heikkinen’s international operation started from the construction of the concentration plant combine in Kostamus in Russia, which was the first planning project outside Finnish borders for the company.

Power plant projects for Pohjolan Voima Oy continued along the western coast, and designing apartment and business buildings was active in Northern Finland. In the 1970s, the firm also profiled itself as designer of different sports arenas. The best-known sports arenas designed by architectural firm Uki Heikkinen include the Oulu ice stadium, completed in 1977, and the Oulu sports hall. 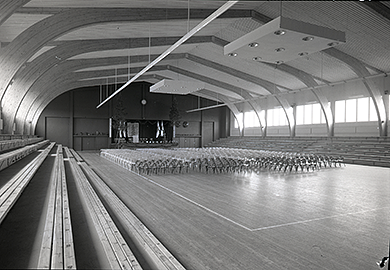